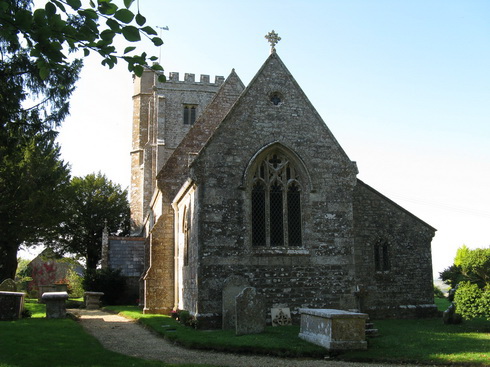 If you are travelling along the A35 from Dorchester towards Bridport, at one point the road rises and a wonderful view of west Dorset comes into view. At the northern foot of Askerswell Down can be seen the village of Askerswell; beyond is the great hill fort of Eggardon Hill.

Askerswell church is described as "newly built" in the Bishop of Salisbury's Charge of 1858 [1]. In fact, it was a major rebuilding of an older building, the 15th century tower being retained. Newman and Pevsner (p. 79) report that the church was built by Talbot Bury (of London) in the Perpendicular style, 1858. It has a Norman font and a 15th century carved stone relief of the Crucifixion set near the west door into the tower. There is also a memorial, an old stone containing the imprint of a cross that Monica Hutchings says was "found in the mill dam, a little to the west, and believed to have come originally from the abbey at Abbotsbury" [2]. Pitfield (p. 39) elaborates on this:

Perhaps the most interesting relic preserved in the present building is an incomplete stone slab with the top part missing, which was discovered in a nearby mill stream some years ago, and which originally formed part of a double slab, the other part of which is preserved in the church of Whitchurch Canonicorum. The slab has indentations for a central foliated cross and a perimeter inscription of individual letters, all of which would have originally been filled with brass. The complete double slab came from Abbotsbury Abbey and is a memorial, of early 14th century date, to Thomas de Luda and his wife Eleanor [Alianore], recording the gift of the manor of Holywell to the abbey. 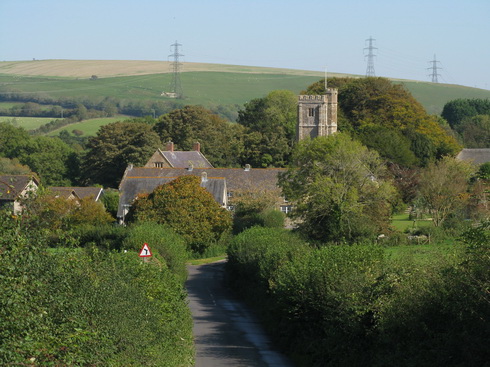 When Canon Raven produced his description of the church bells of Dorset there were five bells [4]:

Both probably cast by Thomas Purdue at Closworth (Somerset)