The following series of photographs were taken on an open-day held sometime in 1987 to help support the activities of the local Scout (or Cub Scout) pack. 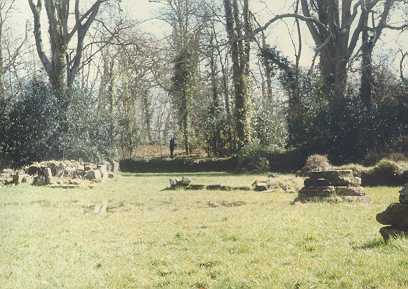 Photograph 1: View of ruins looking east from the west end of the nave towards the tower crossing and the site of the high altar. 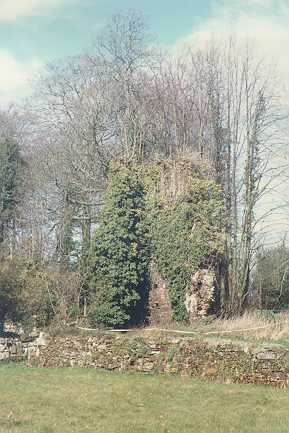 Photograph 2: Surviving remains of part of the west wall of nave and north arcade.

These are the highest surviving part of the ruins (about 25 ft.). Eighteenth century engravings (e.g. in Hutchins) show that several arches from the arcade survived until that century, but these are now gone. This photograph is taken from inside the cloister garth. 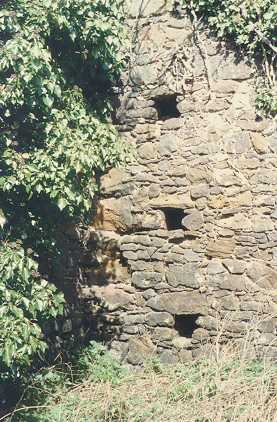 The Abbey was mainly built from two locally-quarried stones: the brown coloured Heathstone, a Tertiary (Eocene) sandstone - which can be clearly seen in this photograph of the arcade - and the grey coloured Purbeck Limestone that was more often used for decoration and trimmings. The extent to which ivy covered the ruins can also be seen in this photograph. 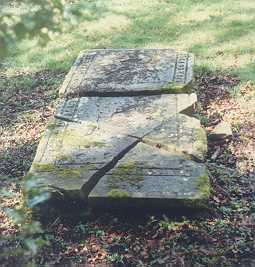 This is the most impressive of the (uncovered) grave slabs at Bindon. It is made from Purbeck Marble, contains an impress for a (long gone) brass and the inscription (in Lombardic capitals) reads:

G. Dru Drury has managed to date the Abbot to the early fourteenth century. Unfortunately, like all of the other tombs at Bindon Abbey, this one has decayed badly in recent years. 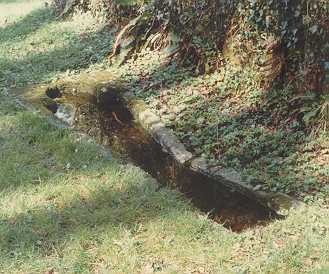 An empty stone coffin close to the North wall of the chancel, used to dramatic effect in Thomas Hardy's novel Tess of the D'Urbervilles.

Here the ground led up to a plantation, and close to it was a fence which had formed the margin of the Abbey grounds. He [Angel Clare] paused at this spot, clambered over, and, taking a new hold of her [Tess], went onward a few steps till they reached the ruined choir of the Abbey-church. Against the north wall was the empty stone coffin of an abbot, without a lid. In this he carefully laid her. 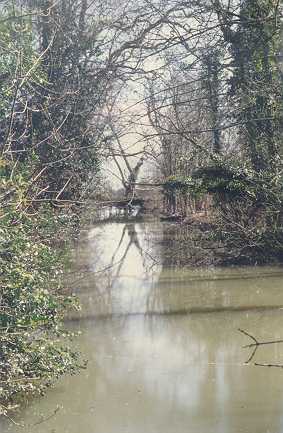 To the East of the Abbey ruins are the remains of the Abbey's fishponds. These were converted in Tudor times into a water garden, the square "moat" being skirted by a pleasant walk and protecting a mound built over a small underground room which may have been an small chapel or grotto, sometimes called the "ice-house"

The old fish-ponds, arched in by avenues of deciduous trees ... ; the level grassed walks, once trodden by hordes of monks; the calm stillness which pervades the whole place; the half-obliterated foundations, making the once extensive walls which enclosed cloister, great-house, refectory, kitchen, hospitum, sacristy and dormitories, together with many other offices pertaining to the Abbey - all tend to lead the mind into speculative channels of thought on the conditions of life when the Abbey was in its prime, and the changes wrought by time which it must have witnessed.. 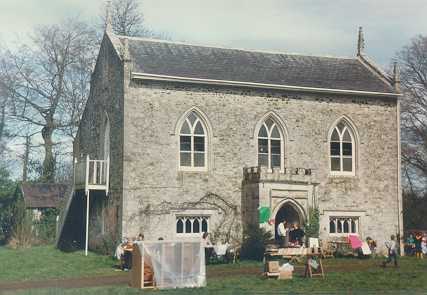 Bindon Abbey House was built in the eighteenth century by Thomas Weld as a retreat from his main house at Lulworth Castle. The top floor of the main wing took the form of a chapel [...]. Rooms in the house were used as a Roman Catholic School in the nineteenth-century, while the chapel on the upper floor was used for church services until St. Joseph's R.C. Church was opened in the 1970s. The house is currently inhabited. The external staircase on the west wall, which was once the main public entrance to the chapel, has now been removed. 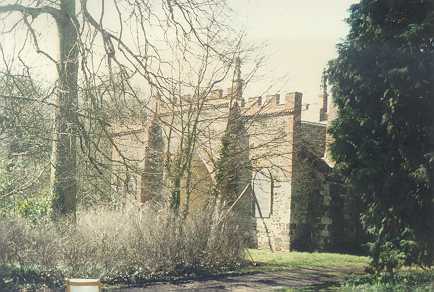