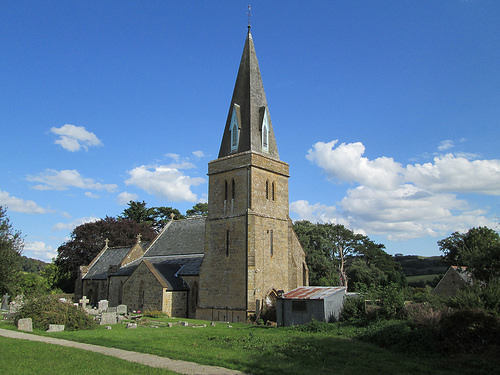 Bradpole is a village about one and a half miles north of Bridport in West Dorset. The church is entirely Victorian, having been rebuilt on a different site to the old church in 1845-46. Hutchins says that the medieval building was "in a dilapidated state and totally inadequate to the wants of the population". A spire was added to the tower in 1863 and the church was enlarged in 1897 by C.E. Ponting. Survivals from the earlier church are the font (fifteenth century) and a royal coat of arms in metal.

A short history of Holy Trinity Church, Bradpole, by Ivan Andrews. 1999.
An eight page booklet produced by Bradpole's church historian. There is also a four page leaflet entitled "Welcome to Holy Trinity in Bradpole" which contains a short history of the church, details of church services and some prayers.

Bradpole currently has a ring of eight bells:

These are relatively recent, having been recast in 1981 by the Whitechapel Foundry. There has been eight bells in the tower since 1910, when Llewellyn and James (of Bristol) augmented the old ring of six and hung them in a new frame. In Canon Raven's time, there were six bells - mostly contemporary with the addition of the spire (Raven, 1904, p. 71):

The current guide book says that there were four old bells that were re-cast into two new ones by Mears of Whitechapel at the time of the rebuilding in 1845-46. It says that the lighter of these two bells was removed in 1865 and replaced by four new bells cast by John Warner of Cripplegate (as against Raven who reports all five bells as having been cast by Warner). The ring was then augmented to six in 1896, and to eight in 1910.