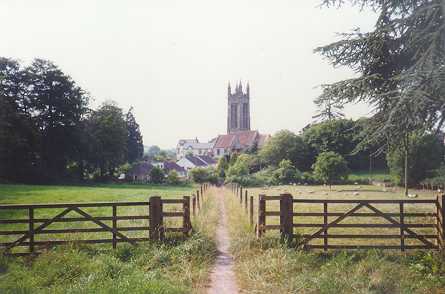 This is one of my favourite Dorset Churches. Most of the church was rebuilt in the late nineteenth century, the architects being Sir George Gilbert Scott and his son George Gilbert Scott, Jr. The son was responsible for the tall Perpendicular-styled tower, apparently modelled on the 15th century tower at Charminster. Pevsner comments (pp. 130-131) that "for the mid to late C19, this is the masterpiece among Dorset churches."

"The Church of Cattistock, dedicated to St. Peter and Paul, its monuments, &c. is thus described in the previous edition of this work: 'it stands on the south side of the parish, and is an ancient fabric, consisting of a chancel and body, covered with lead, and two aisles tiled. On the north side of the church is a low embattled tower, built chiefly with flints; the lower part forms a large commodious porch, and is the principal entrance to the church, but a round arched door. The east wing is square. There are two small transepts. The tower contains three bells.

"The north aisle, built by Mr. Mayo, buts against the east side of the tower; and, as appears by a memorandum in the register, was built by John Mayo, rector, 1630; half of it on the east part he appointed to Chalmington farm, then Sir Richard Strode's and his heirs; and the four seats on the west to North Chalmington farm, to Wicham, to the rectory, and to Merrifield.

"The south aisle belongs to Chantmarle farm; on the wooden screen that divides it from the body were the arms of Strode carved on two escutcheons.

"On carved screen of wood, which divides the chancel from the body, was this inscription:

"These screens have been long since removed. They are not now remembered by the oldest persons in the parish.

The last couple of times that I have visited this Church there has not been a Church guide available. That said, there was an excellent display in the Church itself giving an account of the history of this wonderful building.

Before 1940, Cattistock had a carillon of 35 bells. Raven (1904, p. 35) said that 33 of the bells were cast in Louvain (Leuven) by Severin van Aerschodt between 1872 and 1882, two by his son Felix in 1899. The ringing peal was installed in 1882, the carillon being installed much later and dedicated on the 1st June 1899. Unfortunately, the carillon and tower were destroyed by fire in September 1940 and, although the damaged parts of the tower were restored, the carillon itself was never replaced. Instead, a completely new ring of eight bells (by the Whitechapel foundry) was installed in 1950. 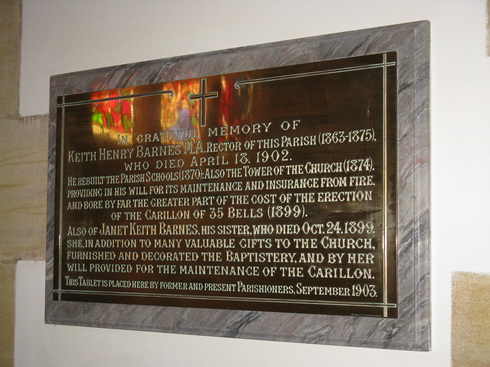 St. Peter and St. Paul, Cattistock: Memorial to the Rev. Keith Barnes and his sister.

An interesting article on "English carillons" in The Musical Times (Starmer, 1915) gives some more background on the origins and development of the carillon:

"In 1863 the Rev. H. Keith Barnes became rector of Cattistock, and being a great lover of bell music he determined that he would have a suitable tower built to his church which should contain a carillon with clavier. The old tower was too small, and could not in any way be made to suit the requirements, so Mr. Gilbert Scott, Junr., was employed to design a campanile. The tower was completed in 1876, and is 100 feet high, the bells being about 75 feet up. The design is excellent, but if it could have been made another 50 feet higher it would have been a great advantage to the carillon. For carillon use bells ought never to be less than 100 feet from the ground. The cost of the tower was £3,000, defrayed by Mr. Barnes. There are 35 bells, of which 33 were cast in 1882 and 2 in 1899 - the former by Severin van Aerschodt and the latter by Felix van Aerschodt. The largest bell weighs 19 cwts., and the total weight of the carillon is 4 tons 17½ cwts.

"Mr Barnes completed his scheme by leaving a sum of money for the special purpose of providing for the upkeep of the carillon.

"Taking the bells as a whole they are good representative work of the period when they were cast, but do not fulfil the modern requirements as to tune. Bells at the present time can be tuned to the accuracy of a single vibration, and in England now better than in any other country. The present rector, the Rev. R. P. Stickland, has nobly carried on the project initiated by Mr. Barnes, and once a year on the last Thursday of July M. Josef Denyn gives a recital and also arranges the tunes for, and directs the work of setting them on, the chime-barrel.

"The chime-barrel contains no less than 7,200 holes, into which the studs are fixed according to the requirements of the music.

"There are 72 chime-hammers, 60 of which are in active use. The multiplication of hammers is to facilitate quick repetitions.

"Eight bells are used as a ringing peal."

An article published in the same journal later that year (Colles, 1915) gives some additional details on the arrangements for the ringing peal:

"The Rector of Cattistock told me that when M. Denyn was first consulted about the arrangements for the carillon he very naturally suggested that it would be necessary to do away with the peal. The combination of carillon with bells that are swung for pealing was outside his experience, and it no doubt seemed a simple thing to forfeit so primitive a method of obtaining bell-music for the sake of the more cultivated carillon. But the Rector, as a true pastor of his flock, knew better. He saw at once that in that case his own ambition to possess a carillon must go by the board. England is a democratic country, in its church management as in other things, and the village democracy would not sacrifice its peal for all the carillons in Belgium. It takes eight stalwart men to peal the bells, and they were not to be done out of their privilege. Everyone knows the hold which the art of ringing changes has upon the minds and muscles of Englishmen."

Obviously some way was found of reconciling the two points-of-view, although Dalton (2000, p. 153) reports that the bells hung for full-circle ringing (which were in a separate lower-level frame) were extremely difficult to ring, with clappering problems on the lighter bells. This is certainly what the Bell News reported in its account of the dedication of the bells on the 10th October 1882 (Anon, 1882):

It had been decided almost from the first, that eight of the heavier bells of the carillon should be hung for ringing, and when they arrived at Cattistock last February, the work was taken in hand by Messrs. Hooper and Sons, who as far as the actual hanging of the bells are concerned, have done their work most satisfactorily. Unfortunately, however, as all ringers would naturally expect, Belgian founders not being in the habit of casting bells for ringing, the clappers sent from Louvain were found to be useless, and an enormous amount of time and trouble has been expended in new clappers; for owing to the practice in Belgium of casting small and large bells all to one scale, it has been found exceedingly difficult to arrange the clappers so as to obtain the pull from the light bells without making the clappers too heavy for the bells. This difficulty has not yet been overcome, but it is hoped that it soon will be, when it can be safely predicted that the church of SS. Peter and Paul, Cattistock, will possess as fine a ring of eight as any church in England.

It was the specific wish of Mr Barnes - who had by this stage been compelled by ill-health to resign the rectory - that the bells should be opened by Oxford ringers. A band duly arrived the day before, but it was not possible them to go for a full peal after the dedication, due to the state of the clappers. Instead, they rang shorter touches of Grandsire, Stedman and Treble Bob.

Jef Denyn's annual carillon recitals at Cattistock were reviewed in The Musical Times in 1911, and again between 1915 and 1918. At the time, there was much concern about the fate of Belgian carillons during the German occupation, especially that of Malines (Mechelen), of which city M. Denyn was carillonneur. The final report in 1918 recorded that the Mechelen carillon had not been destroyed, "and for this we have to thank that grand old man, Cardinal Mercier, who has ever kept his watchful eye on the bells from the very beginning of the Hun occupation of the city."

Both Raven and Dalton provide full details of all of the bells, although Raven's first attempt resulted in the accidental inversion of all of the inscriptions (Raven, 1906, p. 106). The following has been checked with Dalton's account, but extracts the eight bells used for full-circle ringing and provides the traditional (heaviest first) ordering of the remaining carillon bells. Dalton provides weights for all the bells, the lightest (the 35th bell) being 23 lbs.

The first two were from Thomas Purdue's Closworth foundry; the second probably by his successor Thomas Knight. The tenor was a medieval bell from the Salisbury foundry. 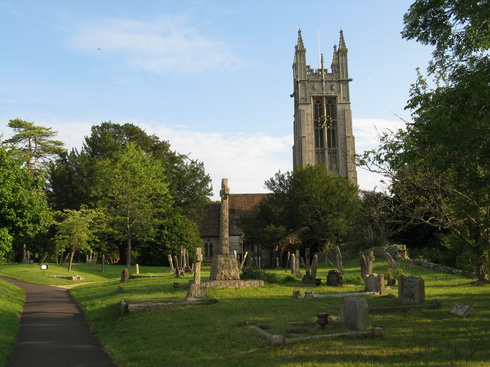 St. Peter and St. Paul, Cattistock, from the north.

In the south aisle is a two-light window of 1882, by Morris. Newman and Pevsner describe it as "exquisitely beautiful" - six angels in red and white robes against a starry deep blue background. 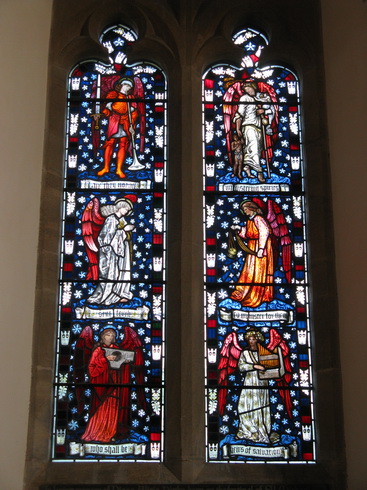 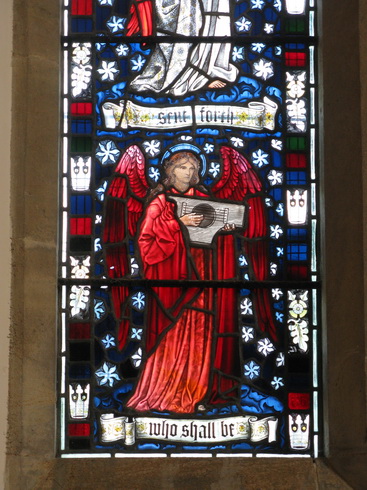