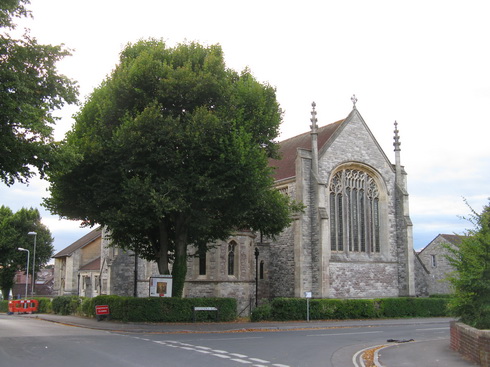 St. Mary's Church, Edward Road, Dorchester. The tree hides the fact that it is now missing its flèche

St. Mary's Church was built to serve the growing population of Dorchester at the turn of the twentieth century. The present church building succeeded a corrugated iron church built near Top O'Town in the 1890s, but not without controversy. The parishioners, with the support of the Vicar of Christ Church, West Fordington, the Rev. J. M. Collard, wanted to build a permanent church on the same site near Top O'Town. The diocese disagreed, proposing a readjustment of the ecclesiastial parish boundaries and the building of the new church in the new suburban district being built to the south of the town. Following a formal Appeal in 1907 and the ruling of a Commission appointed by the Bishop of Salisbury in 1908, the matter was finally settled when the Rev Collard reluctantly agreed to go along with the Commission's plan. The parish boundaries around Dorchester were redrawn, and a new church was built on a site in the Victoria Park Estate then being built to the south west of Dorchester. The church was originally known as St. Mary the Virgin, West Fordington.

The building is by C. E. Ponting, 1910-12, who was Diocesan Architect of Salisbury and based at Marlborough. Newman and Pevsner refer to this as his magnum opus:

It is Gothic still - i.e. not liberated yet, as Prior and Lethaby and Lutyens (Hampstead Garden Suburb) were - but is in the free Arts and Crafts Gothic which is also an English speciality. The building is large and lavish, with transepts and clerestory and a flèche [since removed]. The style is Dec to Perp. External decoration is concentrated on the S porch, which was meant to be the base of a tower. But the most attractive, because most original, feature is the priest's doorway further E.

A high tower with pinnacles was depicted on a leaflet appealing for building funds; a low-resolution copy of which can be found in the Incorporated Church Building Society Church Plans Online collection made available by Lambeth Palace Library (look for: "DORCHESTER, St. Mary the Virgin, West Fordington" under location). 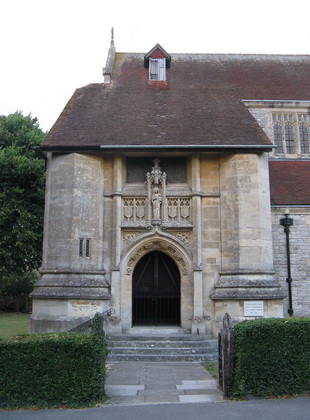 The porch of St. Mary's Church, Dorchester; intended to be the base of a tower