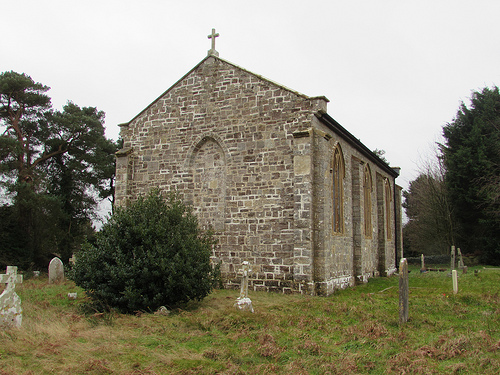 A small chapel designed by the architect J. T. Parkinson of Jersey and built in 1836-40. Originally in the parish of St Christopher's Winfrith Newburgh, it was transferred at some point in the twentieth-century to the parish of Wool and Coombe Keynes.

There is an account of the consecration service in The British Magazine of 1840:

Consecration of Burton Chapel. - The interesting ceremony of consecrating the chapel just completed at Burton, in the parish of Winfrith, took place on the 7th Sept., by the Lord Bishop of Salisbury [Edward Denison], assisted by many clergymen of the neighbourhood. The chapel is capable of containing about one hundred and fifty persons, and the ground on which it has been erected was given by the Rev. G. I. Fisher, rector of Winfrith Newburgh; it has been built by contributions from the inhabitants and neighbouring gentry, aided by a grant from that excellent institution, the Church-Building Association. The collection made amounted to 12l. 15s. ... [From: The British Magazine, Vol. XVIII (1840), p. 476]

There is an interesting early image of the church in the Incorporated Church Building Society archives made available through the Church Plans Online website (http://www.churchplansonline.org/), discoverable under "West Burton". The elevations from 1832-40 show a small, but ornate, bell-cote above the porch. In the ICBS files, the professionals associated with the chapel are Edward Mondey of Dorchester and the builder John Spinks of Charminster.

In the early 1970s the building was declared redundant and went through a long period of occasional (secular) use and disuse. In 1999, the building was purchased by the "Purbeck Vineyard Christian Fellowship" and restored for use as a place of worship. It is currently used by the Wool Cornerstone Church, who also run a community café.

Canon Raven reports that there was one small bell, hung in a special turret on the south gable of the church. This was removed sometime in the 1970s after the church was made redundant.