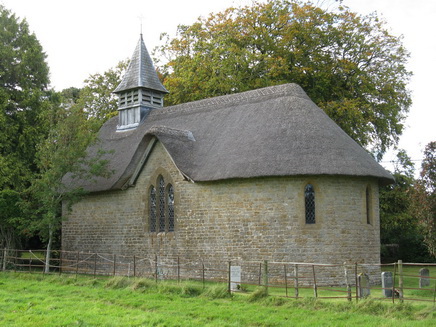 This unusual thatched church - the only one in Dorset - was built in 1921 by the Manger family. Alfred Manger of nearby Stock Hill House had intended to build a church for local residents and estate workers, but died in 1917 before he could fulfil his plans. After the First World War, Alfred's eldest son Charles Harwood Manger took over the task. The church was built in part as a memorial to three family members (Charles's brother, cousin and brother-in-law) that had died in the war. The architect was C. E. Ponting, then Surveyor of Ecclesiastical Dilapidations for the Salisbury Diocese. The chapel is designed in the Arts-and-Crafts style and is said to have been influenced by the Church of St. Agnes, Freshwater Bay (Isle of Wight).