The chancel arch in Wool Church is the work of the thirteenth century, and it is not only most pleasing in appearance, but is possibly a unique form of chancel arch of this period. The unusual effect is produced by filling in the large chancel arch with a stone screen, which is pierced by three equal bays (10 ft. 6 ins. high by 3 ft. 6½ ins. wide), having pointed arches. These sub-arches rest on octagonal shafts, 32 ins. in circumference, without capitals, and with a base mould near the floor. The tympanium is quite plain, and has neither a trace of fresco nor sculpture upon its surface.

The font in this church dates from the fifteenth century, and is of special interest, as it was evidently designed for the position it still occupies against the westernmost pier of the north arcade of the nave. The bowl has a diameter of 20½ ins., and is 11 ins. deep. Each face is 11½ ins. square, and is adorned with a quatrefoil within a circle. The lower portion of the bowl is chamfered away 7½ ins., and rests on a pillar 8½ ins. high. This pedestal has a 2 in. chamfer at the bottom and rests on a plinth 10 ins. wide and 8 ins. deep.

Fragments of mutilated cresset-stones have from time to time been discovered in England, but those that are perfect are very few in number. Wool Church, however, possesses a cresset-stone which is nearly in as good a condition as when it left the hand of some mediæval workman. A cresset-stone has been described as a large block of stone in which one or more cup-shaped hollows are made to serve as cressets. In the Rites of Durham Abbey we find that one was placed in the church and two in the dormitory. The account runs as follows :-


"Also there is standinge on the south pillar of the Quire doore of the Lanthorne, in a corner of the same pillar a four-squared stone which hath been finely wrought in every square a large fine image whereon did stand a four-squared stone above that which had twelve cressets and every night one of them was nighted, when the day was gone, and did burn and give light to the monkes at midnight when they came to mattens."

The description of the two in the dormitory reads as follows :-


"In either end of the same dorter was a four square stone wherein was a dozen cressets wrought in either stone, being ever filled and supplied with the cooke as they needed, to give light to the monkes and novices, when they rose to their mattens at midnight, and for their other necessary uses."

These cresset-stones at Durham had a dozen cups in each stone, but the one still preserved at Wool has only four cups. It is carved out of a block of Purbeck marble, and is rectangular in shape, being 9½ ins. by 7½ ins., and 5 ins. deep. The cups are placed in each corner of the stone, and they are 3¾ ins. deep, with a diameter of 3½ ins., while their surfaces are blackened as if by unctuous matter having been burnt in them. It is not unlikely that this cresset-stone may possibly have belonged to Bindon Abbey, which is situated not far from the church and village of Wool. This abbey was founded for the Cistercians, in 1172, by Roger of Newburgh and Matilda his wife. Thus the cresset-stone is not older than 1172. 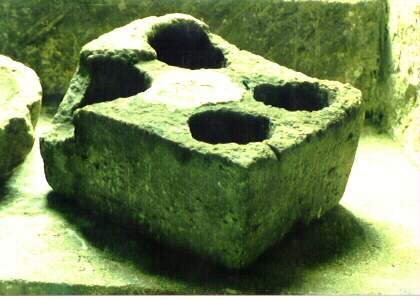 Bindon Abbey is a complete ruin. The foundations, however, remain, and the church, cloister court, sacristy, chapter-house with monumental slabs, slype leading into the cemetery, calefactory divided by a row of columns, may all be accurately traced, and conform to the usual Cistercian ground-plan. The church had a long nave, transepts with square chapels opening from them, a short eastern end and a central tower. Tradition declares that this tower contained twelve bells, and the story goes that they were stolen from the abbey by night, and are now in the churches of Wool, Combe, and Fordington. The following doggerel commemorates the event :-

The Combe referred to in this doggerel is Combe Keynes, the mother church of Wool, and Fordington is Fordington St. George, at Dorchester.

The Wool bells are all dated, and all of them were made after the dissolution of Bindon Abbey, so that the clergy and people of Wool are free from the theft which tradition ascribes to them. The large bell at Wool is dated 1659; it weighs 8 cwt., and is 2 ft. 11¾ ins. in diameter. The second bell bears the date of 1738; it is 3 cwt. lighter than the great bell, and is 7¼ ins. less in diameter. The third and fourth bells were cast in 1606. The one weighs over 6 cwt., and has a diameter of 31 ins.; the other is considerably lighter, and has a diameter of only 25½ ins.