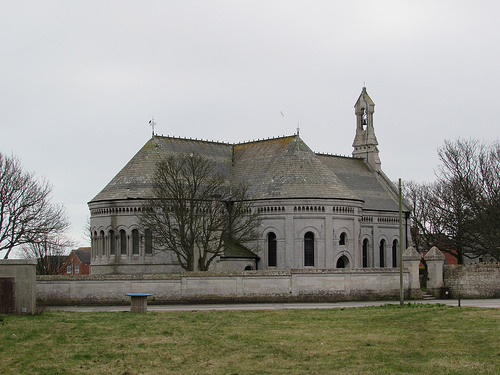 Built 1870-72 in Romanesque style. Located next to what was once HM Prison Portland (now HM Young Offender Institution), the Church of St Peter was designed by Major-General Sir Edmund Du Cane (18301903) - when he was chairman of the convict prison directors, surveyor-general of prisons and inspector-general of military prisons - and built by convict labour from Portland prison and elsewhere. Mosaic pavements were made by female inmates from other prisons. Newman and Pevsner say that "St Peter is in its own way as surprising and as bold in scale as St George Reforne, Easton. It is also of ashlar, Romanesque not Norman in style, has a dwarf gallery under the eaves, large apsed transepts, and a low, wide E apse with small windows, and no campanile. The roof is open timbering with hammerbeams and arched braces and the crossing marked by the crossing of pairs of diagonally set arched braces."

The church was declared redundant in 1973. As as Listed Grade II* building, it was included in English Heritage's list of Heritage at Risk in 2008.