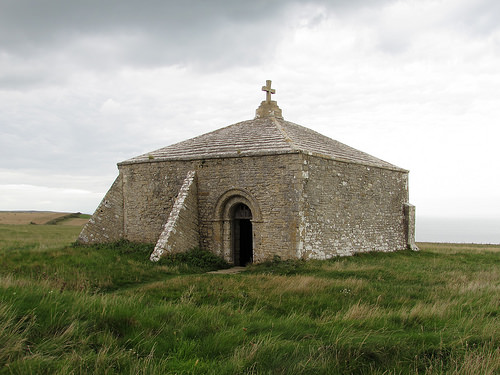 Situated on the tip of St. Aldhelm's (or St. Alban's) Head, this small chapel dedicated to St. Aldhelm is in the parish of Worth Matravers. It's early history is obscure. It's architecture is Norman in style; later documents suggest that it existed in the thirteenth century. There is an interesting legend about its origins recounted in the chapel guide:

It is said that in 1140 a bride and groom were sailing around the headland watched by the bride's father. A storm suddenly arose, the boat capsized and both were drowned. The desolate father is said to have built the chapel to their memory; and a light was always to be kept burning to warn other sailors.

Whether this story is true or not, most authorities accept that this small vaulted building was some kind of chantry. By the 17th and 18th centuries, the chapel was beginning to become derelict. It was restored in the 19th century, and re-opened as a chapel in 1874.

Chapel of St. Aldhelm on St. Aldhelm's Head / 1st edition by Marjorie Wallace, 1985 ; 5th edition (revised) by Robert Watton, 1996.
Six page A5 sized booklet that includes a history of the chapel, some speculation on its origin and the 19th century restoration.