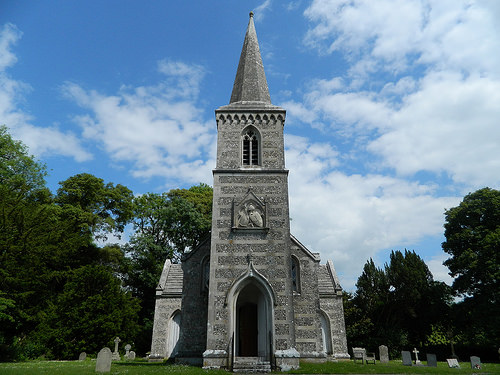 A small early Victorian church, rebuilt in 1839-40 by Lewis Vulliamy. It is described by Pevsner (1972, p. 477) as a "typical estate church", who also opines that it is "typical of the pre-archaeological C19 church." The building was built at the expense of Mrs Michel (of Whatcombe House) and consecrated in 1840 by the Bishop of Salisbury, Edward Denison. The editors of the third edition of Hutchins (1861, p. 192) considered it to be "an attractive addition to the landscape." St. Nicholas is a small church, consisting of a western tower, a nave, two transepts and a very short chancel. I think that it was used for the wedding scene at the end of a recent film version of Jane Austen's Emma (1996). The consecration was reported in the Salisbury Herald as follows:

Consecration of the New Church at Winterborne Clenston. - The Lord Bishop of Salisbury arrived at Whatcombe House, the seat of Mrs. Michael, on the evening of the 7th September, in order to consecrate, on Tuesday morning, the new church just erected in the village of Winterborne Clenston, at the expense of Mrs. Michael. Not only has she erected this church and founded a school at Winterborne Whitchurch, but she is also now engaged in founding schools in other villages on her estates. The consecration was attended by a very great number of the clergy and gentry of the neighbourhood, and a large assemblage of inhabitants of all classes. [From: The British Magazine, Vol. XVIII (1840), p. 471]

Hutchins (1861, p. 192) reports that the old church was "a small plain building, consisting of a body and a small south aisle." 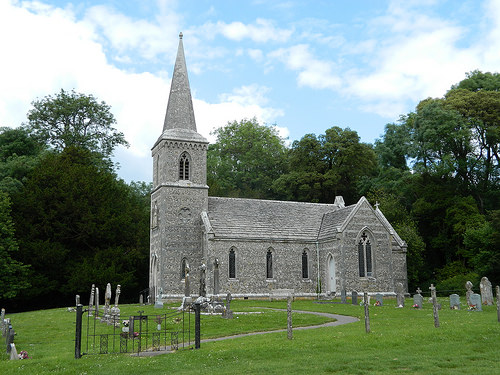