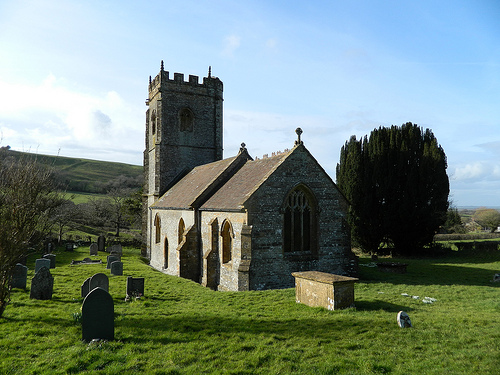 Batcombe Church from the East, February 2014

Batcombe is a very small village hidden under the northern slope of the Dorset Downs. The church consists of a nave and chancel with a 15th century tower. Much of the church was rebuilt by John Hicks in 1864, which resulted in the loss of the Minterne chapel - the memorial tablets being re-positioned on the north side of the tower. The interior contains an elaborate stone screen of Ham Hill stone and an interesting font consisting of a Norman column of Ham Hill stone topped with a cuboid limestone basin (probably Portesham stone) which is probably earlier in date.

The church is the subject of one of Dorset's more curious tales. It is said that at one time, the local squire, who was known as 'Conjuring Minterne', rode his horse off Batcombe Hill and knocked off one of the pinnacles on the tower. It is said that Minterne vowed that he would be buried neither in nor out of the church, so he was buried half inside and half outside of the Minterne Chapel.

Batcombe is close to Hilfield Friary, the mother house of the Anglican Society of Saint Francis (SSF).

The Church of Saint Mary Magdalene, Batcombe.
A small folded paper leaflet comprising a brief history of the church, some details of architectural features and other information. A selection of colour postcards are also available. 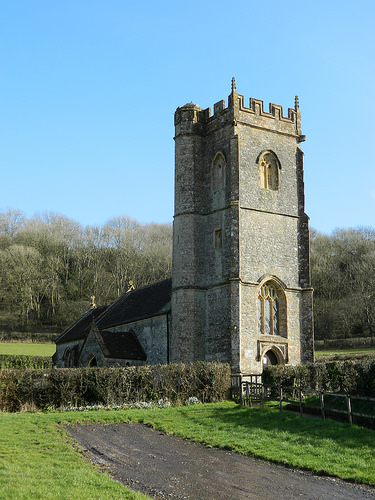 Batcombe Church from the East, February 2014

The current church guide says that a bell by William Warre - cast in nearby Leigh - sits in the belfry, but is now cracked. A newer bell, cast at the Whitechapel Foundry in 1958, was recast from two older cracked bells (one of which was medieval).

The Treble bell (Raven's second bell) is dated 1592. H.B. Walters (1938. p. 108) identifies the founder as William Warre of Leigh, of which "there is a group of 21 bells in Dorset and four in Somerset, several of which bear the initials WW, and all of which are inscribed with the same rather rude Roman capitals with a ... [fleur de lys] shaped letter I." RCHME (1952) add that the bell-frame is old. Warre's 1592 bell survives (but is cracked and not hung for chiming), while the other two older bells - including the 14th century treble - were destroyed in 1958 to cast a new bell. 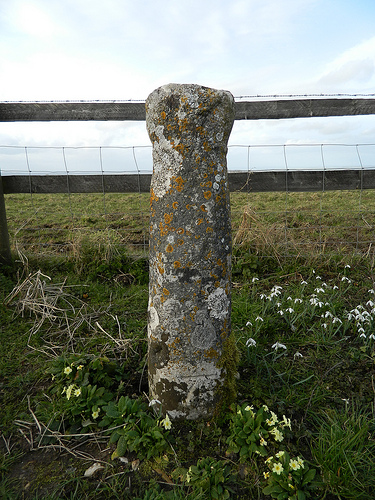 Next to the road that runs across the northern edge of the Dorset Downs above Batcombe, can be found another one of Dorset's curiosities. This is the stone pillar known as Cross-in-Hand (or 'Crossy Hand'). No published authority is certain what this ancient pillar represents. It may just be a long-forgotten boundary marker, but it has been suggested that it could be the site of a gruesome murder, a miracle, or both. Thomas Hardy wrote a poem called "The Lost Pyx" (published in Poems of the Past and Present) to embody the miracle tradition, but also featured the pillar in Tess of the D'Urbervilles [1]. In chapter xlv of Tess, Alec D'Urberville makes Tess place her hand on the stone hand visible (to some) on the top of the pillar and swear that she will never tempt him again, by her "charms or ways". D'Urberville claims that the pillar is a "Holy Cross", but a passing shepherd later explains to Tess its 'real' meaning [2]:

"Cross - no; 'twer not a cross. 'Tis a thing of ill-omen miss. It was put up in wuld times by the relations of a malefactor who was tortured there by nailing his hand to a post, and afterwards hung. The bones lie underneath. They say he sold his soul to the devil, and that he walks at times."

Hardy's description of the spot is still worth quoting [3]:

At length the road [from Evershead to Abbot's Cernel] touched the spot called "Cross-in-Hand". Of all spots on the bleached and desolate upland this was the most forlorn. It was so far removed from the charm which is sought in landscape by artists and view-lovers as to reach a new kind of beauty, a negative beauty of tragic tone. The place took its name from a stone pillar which stood there, a strange rude monolith, from a stratum unknown in any local quarry, on which was roughly carved a human hand. Differing accounts were given of its history and purport. Some authorities stated that a devotional cross had once formed the complete erection thereon, of which the present relic was but the stump; others that the stone as it stood was entire, and that it had been fixed there to mark a boundary, or place of meeting. Anyhow, whatever the origin of the relic, there was, and is, something sinister, or solemn, according to mood, in the scene amid which it stands: something tending to impress the most phlegmatic passer-by.

The setting of the stone has changed in recent years. In the late 1990s, the cross could be found on the roadside, slightly hidden in the verge next to a hedge; since then, it has been enclosed within a little wooden stockade (with stile) and the hedge has vanished. Such is progress.

It is a Grade II Listed Building: http://www.britishlistedbuildings.co.uk/en-105331-the-cross-and-hand-batcombe-dorset