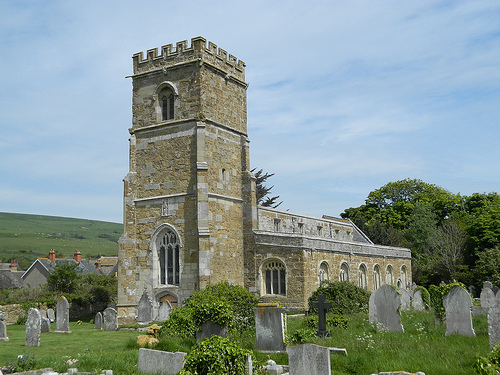 The Parish Church of St. Nicholas in Abbotsbury is an attractive church built of the golden local stone (Corallian). Its origins are probably tied up with the Benedictine abbey that dominated Abbotsbury in the Middle Ages. Pitfield (1981, p. 15) suggests that there may have been a dispute between the parishioners and the monks and that the problem was resolved by building a new parish church outside the abbey precincts. The new church was built in the fourteenth century, the western tower was added in the early fifteenth century and the church building was enlarged and remodelled at least twice in the next hundred years or so. During the civil war, the church was the site of conflict - the Jacobean pulpit has two bullet holes in it from the time that Colonel Strangways resisted a Parliamentary force under Sir Anthony Ashley Cooper in 1644. Following the addition of various interior fittings, including a gallery, the architect Arthur W. Blomfield restored the church in about 1886.

Orc and his wife Thola founded the Benedictine Abbey in the reign of King Canute. It was dedicated to St. Peter and it flourished for over 500 years. At the dissolution, the property passed to Sir Giles Strangways, whose descendants own it still, although the Parliamentary army destroyed the Strangways's Abbey House in 1644. Today, little remains of the abbey buildings, as the stone has mostly been re-used elsewhere. Perhaps the most imposing relic is the great barn of the Abbey, often called the Tithe Barn. Other remains can be found in the parish church, for example, the porch of the parish church contains an effigy of one of the Abbots of the abbey church. On a hill to the west of Abbotsbury village is St. Catherine's Chapel. This well-built all-stone building is built in the Perpendicular style and probably dates from the 15th century. Ralph Wightman (1977, p. 170) points out that as well as being a chapel, it must have been "a day-mark for shipping and probably carried a beacon light." He also relates the chapel's significance for unmarried women:

The Dorset dialect jingle asks for a husband, and finishes by hoping for a good one, but anyone better than never a one. "Arn-a-one's better than Narn-a-one."

St. Nicholas Abbotsbury: a brief guide for visitors.
An A5 sized leaflet containing a very brief history of the church and information on things of interest both inside and outside the building. There are also some notelets and copies of the Dorset Historic Churches Trust's book on Dorset churches for sale. 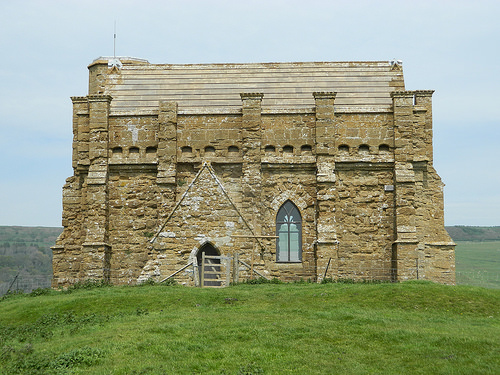 The earliest bell is the fifth, which is dated 1636. It was cast by Robert Austen, who H.B. Walters (1938, p. 109) suggests was probably an itinerant founder, active in both Dorset and Somerset. The inscription is bizarre - given that the bell was donated by Sir John Strangways - but also appears on one of Austen's bells at Preston. The tenor bell is by Thomas Purdue of Closworth (Somerset) 1666. The fourth bell was cast by William Knight, also of Closworth, in 1724, while the three lightest bells are the products of Thomas Bilbie of Cullompton (Devon), and are dated 1773. It is said that these last three were recast from a larger medieval bell that called on St. Nicholas: Sancte Nicholae ora pro nobis.