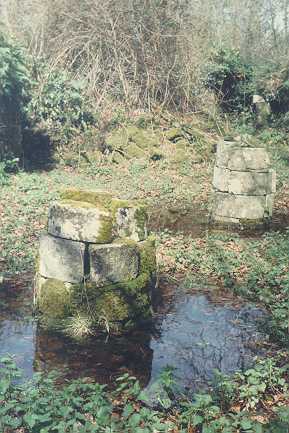 Ruins of Bindon Abbey (1987), undercroft to the Dorter, possibly a day-room for novices.

The ruins of this medieval Cistercian Abbey of Bindon are situated within the parish of Wool in Dorset. The abbey was originally founded at Little Bindon (near West Lulworth) by William de Glastonia in 1149 and colonised by monks from Forde Abbey. In 1172, the abbey moved to a new site (sometimes called Great Bindon) close to Wool village, the land being provided by Roger de Newburgh and his wife Matilda.

The abbey remained small, but survived until the suppression of the smaller monastic houses under Henry VIII in 1536. It was then briefly reprieved, but finally suppressed at the General Dissolution in 1539 [1]. The abbey buildings were mostly demolished soon after the dissolution and the stones used for other building projects, possibly amongst them the building of Henrican coastal defence castles at Sandsfoot and Portland [2]. One result of this is that very little of the abbey remains today - except for foundations. From these it is possible to identify various features of the abbey buildings. Authorities like the RCHM(E) state that it conforms to the usual Cistercian ground-plan and that it is possible to identify the church, the cloister garth, a sacristy and a chapter-house with monumental slabs [3]. Parts of the ruins are more complete; part of the north-west arcade remains standing to an height of about 25 ft. and the sacristy and chapter-house has traces of vaulting and some moulded features.

Several traditions have been preserved that relate to the abbey. One of these relates to the hospitality of the monks. In the nineteenth century, the Rev. Walter Kendall (then Vicar of East Lulworth) recorded a Wool resident named Thomas Trim as hearing people say that a bell was rung at one o'clock each day, "when they might go and have a dinner and no one asked their business and that men in the fields used to unhitch their horses from the plough and go down there for refreshment" [4]. Only slightly better documented is a tradition that the abbey contained twelve bells and that these were stolen from the abbey at night (probably at the time of the suppression) and ended up in the churches of Wool, Coombe Keynes and Fordington. Some locally preserved doggerel recalls these events [5]:

It is very difficult to substantiate this tradition. H. J. Moule, amongst others, notes that Cistercian foundations were not supposed to have any more than a single bell - but the situation at Bindon might have been different [6]. In any case, Fordington (St. George) has two surviving medieval bells: the current third, with the inscription "Sancta Katerina Ora Pro Nobis" and the fifth, "In Multis Annis Resonet Campau Johannis" [7]. Coombe Keynes (Holy Rood) has one surviving medieval bell (now in the Dorset County Museum, Dorchester) with the inscription "Angelus × Michael × Gabriel × Maria" [8]. The 3rd. edition of Hutchins History comments that "the tradition may possibly be correct as to the bells in these churches shortly after the Dissolution; but two of those at Combe, and the whole four at Wool, are of a more modern date. They may, however, have been recast" [9].

In 1541, the King granted the lands of Bindon Abbey to Sir Thomas Poynings, who had married Katherine Marney, the last of the descendants of Roger de Newburgh [10]. Poynings used some of the remaining stone from the abbey to build a house called Mount Poynings on the hill above West Lulworth close to the present Burngate Farm. After his death, some of his lands passed to his brother, from whom Bindon was purchased by Thomas Howard, the husband of Katherine's sister Elizabeth Marney and second son of the third Duke of Norfolk. Thomas Howard, who in 1559 became the first Viscount Bindon, built a house on the site of the abbey which was later extended by the addition of a gallery by his second son Thomas, the 3rd Lord Howard of Bindon. After Lord Bindon died in 1611, the estate passed to the Earl of Suffolk and in 1641 was purchased by Humphrey Weld, a recent convert to Roman Catholicism [11]. Shortly after Weld's purchase, however, the tribulations of the civil wars resulted in the temporary sequestration of his new estate and the burning-down of Bindon House sometime in the 1640s. From that period onwards, Weld and his descendants lived at Lulworth Castle (East Lulworth), originally an grand hunting lodge built by the 3rd Lord Bindon [12].

In the late eighteenth century, Thomas Weld built a small house with chapel at Bindon which is known as Bindon Abbey House. At about the same time, a gothic-styled gatehouse was also built. Both of these buildings survive. Rooms in Bindon Abbey House were used as a Roman Catholic School until 1893, while the chapel on the upper floor was used for church services until the St. Joseph's Roman Catholic Church was built in Wool in the 1970s. The gatehouse was lived in until comparatively recently [13].

Recently, Bindon Abbey has gained additional fame as the proposed site of fictional events in Thomas Hardy's novel Tess of the D'Urbervilles (1891). Hardy made the nearby Woolbridge Manor House the site of Tess and Angel Clare's ill-fated honeymoon [14]:

The abbey ruins feature later in the book as the place where the sleeping Clare carries the novel's eponymous heroine and places her in the empty stone coffin of an abbot.

They had rambled round by a road which led to the well-known ruins of the Cistercian abbey behind the mill, the latter having, in centuries past, been attached to the monastic establishment. The mill still worked on, food being a perennial necessity; the abbey had perished, creeds being transient.

Visitors to the abbey ruins in the early part of this century sometimes implied that Bindon's current peacefulness preserves some vital continuity with the past. Sir Frederick Treves, for example, stressed the melacholy aspect of a destroyed holy place [15]:

The Abbey is in a wood by the river - a dank, melancholy wood, full of shadows. All that remains of the holy place is an outline of its chief parts, a ground plan made up of walls five to six feet high, bases of pillars, indications of doorways and of windows, all so covered with ivy and moss as to have become part of the green shades of the thicket. There are still sombre walks among the trees, straight and stiff, that have been tramped hard by centuries of meditative feet. When the wind howls through the bare trees in winter this monk's walk might be a ghostly walk in Purgatory. In the summer the way is dim, or dappled only by a few flecks of uninvited sun. Around the Abbey in the wood are the monks' fish-ponds. They are dark pools, so cowled with shade that the water is of mahogany colour, and upon its unrippled surface the reflection of the green bank is almost spectral. Here and there the sun, dripping through the trees, makes spots of gold on the bottom of the shallow pond and brings to light the dead leaves of a century.

These are not ruins only, though long years
Have glided gently past this broken door -
Have twined thick ivy with its nested store
Of new-fledged warblers where, bowed down with fears,
Knelt long ago, dissolved in bitter tears,
Sad mourners praying for calm peace once more -
Yet still remains in the heart's true core
The faith that in a wider church appears,
All, all are dead! The stolèd priests are gone,
The sad nuns hurrying to their ceaseless prayers,
The chanting choristers with lifted cross,
And where the altar in its radiance shone,
A shattered stone lies low: the broken stairs
That lead us nowhere. gleam with slipping moss.

Please note that the abbey ruins are private property and are not usually open to the public.