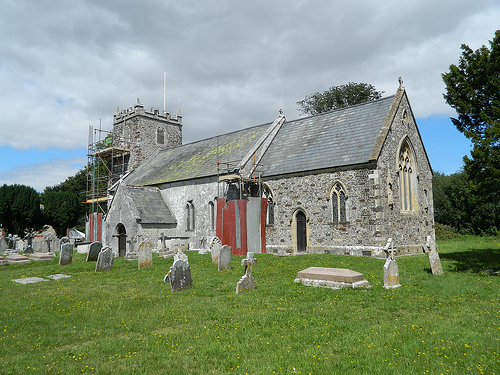 Walters (1938, pp. 101-102) places the Bloxworth treble (inscribed "MARIA all'a") in a group of mediaeval bells "which bear evidence of having been actually cast in the county [of Dorset], although we know nothing of their founders." Walters groups the Bloxworth Treble with two bells at West Orchard and another at Lovington in Somerset. From this latter bell, he gives a provisional date of around 1460. The Tenor bell is by William Knight and is highly decorated with a variety of symbols and other letters. The number "3" in the date 1737 has been cast the wrong way around.

The church guide book reports that there were once three bells: "The story is that the [Tenor] bell became damaged and that the Squire and Churchwardens had it removed for repair. However in 1780 it was sold for 16/- (eighty pence) and is said to have been converted into a large brewing copper which was installed in Bloxworth House."