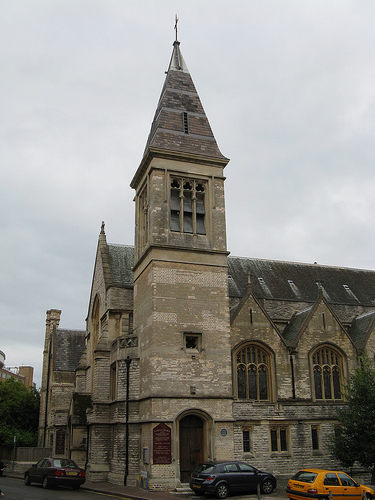 The Catholic Church of the Sacred Heart was designed by Henry Clutton in 1872-74, then considerably enlarged by A. J. Pilkington in 1896-98 (Pevsner and Lloyd, 1967, p. 125). The church is part of the Catholic Diocese of Portsmouth.

Henry Clutton (1819-93) had been articled to Edward Blore at the start of his architectural career and soon gained many commissions for churches, country houses and educational establishments. In the early 1850s, Clutton collaborated with the young William Burges on a competition-winning design for Lille Cathedral, but this remained unexecuted because the clients could not accept a design by a protestant architect (Hitchcock, 1960, p. 156). Clutton was received into the Roman Catholic church in 1857 and a decade later was invited by Cardinal Manning to provide designs for the new Westminster Cathedral. He then spent several years developing a design in the French gothic style before this was abandoned. The cathedral was eventually built in the style of a Byzantine basilica, the architect being Clutton's former pupil, J. F. Bentley.