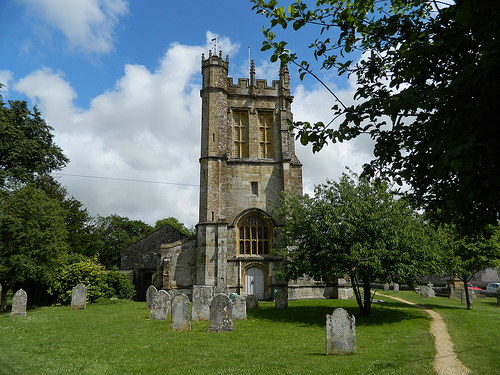 The guidebook reports that the ring of bells were augmented three times in the twentieth century. The original ring of five (details below) was increased to six in 1933, to eight in 1961 and to ten in 1981. In 1988, the interesting pre-Reformation Seventh was rehung for chiming and replaced by a new bell. The current tenor (originally by Thomas Purdue, 1661) was recast at Whitechapel in 1952, the Eighth (dated, 1631) at Loughborough in 1961.

The Second bell (wrongly identified in Raven's orginal work as the Tenor) has a meaningless inscription. However, this has not stopped some campanologists from seeking a meaning. In the last part of Raven's series in the Dorset Proceedings (Raven, 1906, pp. 106-107), "W.M.B." (probably The Rev. William Miles Barnes) speculates that:

It seems to the writer that the inscription on this bell is not a bell founder's jumble, but an inscription by a founder engaged after the Reformation to cast the bell for the church, and who used this cryptic means of recording his own or his employer's adherence to the unreformed faith at a time when such an inscription, if plainly worded, would not have been allowed. He possessed a fount of mediaeval black letter type, as well as a more modern fount, and he mingled both indiscriminately, and added a fleur-de-lis emblem and a symbol which was used at the time in manuscripts to represent S. With this light, on turning to the inscription ... it will be seen to read ... [fleur-de-lis] M. S M. (?) M. M B. M S or "Maria, Sancta Maria, Ave Maria, Maria beata, Maria Sancta."

"H.B.W." (H.B. Walters) then replies that this may be the case - and cites a comparable example at Whitchurch (Warwickshire) - but argues that the Charminster bell looks to him like a "late (Elizabethan) jumble of stamps without meaning." Walters (1939, pp. 107, 115) later argued that this bell (now rehung for chiming only) was probably by William Purdue I, c. 1580-1590 - as were Holnest's Treble and Third and Toller Porcorum's Fourth with similar inscriptions. The Treble and Tenor bells of the ring of five were both by Thomas Purdue (of Closworth), but the Tenor has since been recast.