This is one of my personal favorites. A small limestone village with a huge Victorian church that dominates its position on the northern edge of the limestone plateau in the Isle of Purbeck.

Kingston and its churches

Kingston is perhaps unique, at least in Dorset, that such a small village has two nineteenth-century churches - although one is now a private dwelling (and not open to the public). Kingston had been a chapelry of Corfe for many years when in 1833 John Scott, First Earl of Eldon, replaced the small chapel with a gothic building designed by his son-in-law, George S. Repton.

In the 1870s, the Third Earl decided to build a new church at Kingston. The architect that he chose to design this building was George Edmund Street (1824-1881). Street had written widely on church architecture and on the Gothic style and had become one of the supreme exponents of what is now known as the 'High Victorian' movement in architecture [1]. He had already carried out many church restorations and had designed many important new churches, including: All Saints, Boyne Hill in Maidenhead (1854) [2], St. Philip and St. James in Oxford (1858-60) [3] and the remarkable St. James the Less in Westminster (1860-61) [4]. As diocesan architect in the dioceses of Oxford and Winchester, Street also worked regularly in Berkshire, Oxfordshire and Hampshire, including the enlargement and rebuilding of St. Peter's, Bournemouth (1854-79) [5]. Throughout his career, he also worked on the restoration and enhancement of several cathedrals, including Carlisle, Bristol (new nave) and Christ Church, Dublin (new choir) [6]. Other important ecclesiastical work included St. Margaret's Convent in East Grinstead and Cuddesdon Theological College in Oxfordshire. Perhaps his most important (and controversial) secular work was the Royal Courts of Justice in London [7].

Street's design for Kingston seems to have been influenced by 13th century French models. Gavin Stamp has commented that the apse of the "late and expensive" church at Kingston "indicates French sources while the tall, flat-topped central tower possibly suggests knowledge of that remarkable church in Norrey-en-Bassin near Caen" [8]. Brownlee describes it as a "large, cathedral-plan church, one of his richest commissions, whose massing and general conception were clearly based on an appreciative understanding of his old friend G. F. Bodley's masterpiece, the church of the Holy Angels, Hoar Cross, Staffordshire" [9]. Newman and Pevsner note a round stair turret copied from Christchurch Priory. The Dictionary of National Biography entry on Street commented that St. James's, Kingston was one of the architect's "favorite designs" [10]. This is corroborated by his son Arthur Edmund Street in his memoir of his father [11]:

Kingstone [sic] Church, near Wareham, is probably one of the most complete things my father ever did. It is a regular cross church, with an upstanding central tower, and an apsidal east end. The chancel, crossing, and nave aisles are groined. In the west wall is a great rose window, under which is a narthex of the width of the nave. The mouldings throughout the church are elaborate and beautiful, and the nave arcade, with its richly-clustered shafts, has probably hardly a rival among purely country churches. Lord Eldon being the owner of great quarries of Purbeck marble, that material is used in profusion throughout; all the windows in the church, with the exception of the roses in the west end and clerestory, are lancets, richly moulded internally, and having shafts in the jambs - this gives the opportunity for the use of Purbeck from end to end. Two notes from my father's diary, one during the progress of the work, one after its completion, are here given. The first is as follows:-

"The church is looking well. I hope the interior may be beautiful. It ought to be, for they have already spent a large sum of money on it. It will be difficult to find, even among old buildings, anything more elaborated, I believe. It is a real pleasure to work for such a man as Lord Eldon".

And afterwards he wrote:-

"To Kingstone, where Lord Eldon met me. I could not help saying that the church looked well. It is a pleasure to be allowed to make work so much after one's own heart, as this will be; I think it is the jolliest church I have built."

It was certainly well built, mostly by Lord Eldon's estate workers with carvings by Milburn of York and wrought iron by Potter [12]. Paul Hyland comments that the church "was to be an exemplary piece of craftsmanship; the foreman is said to have insisted that the beds and joints of the stonework should be as well executed as the exposed surfaces, exhorting his men, 'Let your deeds be done as well in the dark as they are in the light'" [13]. 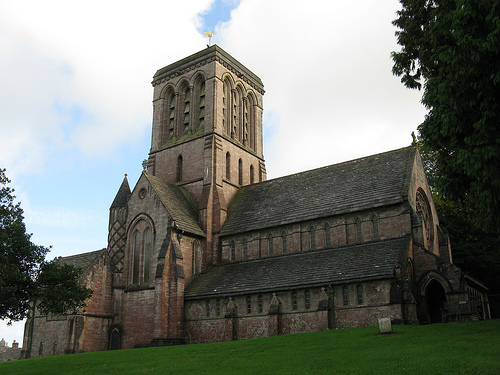 Responses to the church have varied. At the turn of the 20th century, Sir Frederick Treves described it "one of the landmarks of the Isle of Purbeck" [14] and Hyland has described it as "a fantastic building", despite being "in Purbeck, built from Purbeck, [but] ... not of Purbeck" [15]. Newman and Pevsner's opinions are more caustic, them commenting that "the third Earl of Eldon regarded it as a Christian duty to provide a new church, not to [be] commensurate with congregations but with his own means and his own dignity" [16]. Taking this argument further, Chris Brooks has more recently commented on the "authoritarian" nature of some Victorian rural churches, arguing that they "articulated the apparent stability of the agrarian status quo, and functioned in the machinery of socal management designed to keep that status quo in being," adding that Kingston Church "bosses the surrounding countryside from the top of its ridge" and that "its magnificence is overbearing" [17] All of this seems a little harsh.

A few other commentators have noted that the building also contributed indirectly to the decline of the marble trade in Purbeck. Rodney Legg comments that "... the building of Kingston's third church of St. James gave the Purbeck quarrymen an easy job for seven years. Other work was dropped and most of the raw materials came from the old [Purbeck Marble] quarries at Blashenwell. Street's church was built during a recession in the stone trade but on balance did not help the quarrymen because when work was finished in 1880 they found it impossible to renew normal business" [18]. 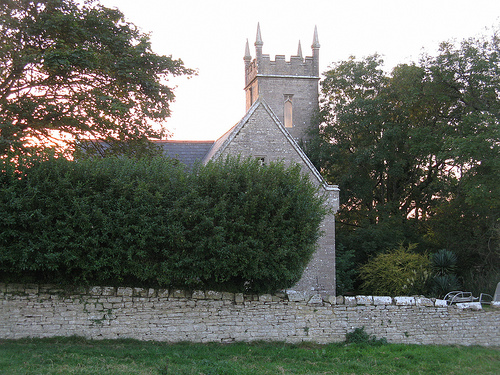 These were a fine Taylor eight, augmented in 2000 to a ten. The new trebles were also cast by John Taylor Bellfounders of Loughborough.

Other works on George Edmund Street:

I would like to thank Malcolm Dale for providing additional information on the architect G. E. Street.