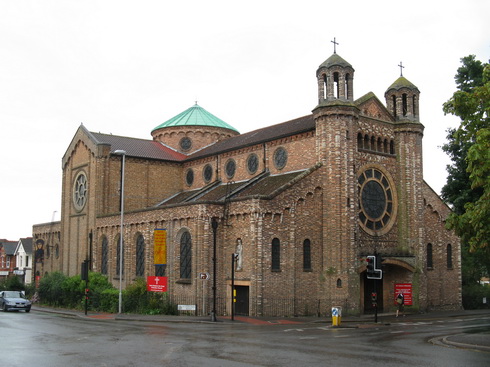 Byzantine style by E. S. Prior and Arthur Grove, 1913-1916; G. A. V. Livesay for the east end. Opinions on this church differ. Simon Jenkins describes the west end as a "masterpiece of eclecticism, with frankish turrets, Lombard arcading, Saxon patterning, above a shallow Art Nouveau arch of terracotta with a vine trail moulding." Brendan Lehane, by contrast, is not sure that it works in its urban context:

Quality of design and workmanship is of the highest. But, to my mind, and thinking mainly of the outside, it fails, albeit magnificently. It might work on a bare Thracian plain or treeless Turkish tableland, but here it is too hemmed, hunched and heavy, too squashed, too pinioned. (p. 96)

By 2000, the building was in trouble. The church authorities claimed that the building was becoming dangerous and would cost a minimum of £300K to make safe. Services were stopped, and in 2002 the team ministry established for the benefice of Parkstone St Peter with Branksea and St Osmund was terminated, and St Osmund's Church declared redundant (Orders Made at Privy Council, 26 June 2002). The church building was put up for sale and acquired in 2005 by a rich Texan man on behalf of the Saint Stephen the Great Charitable Trust, a private foundation that claims to be linked to the Orthodox Church. According to Lehane, since the takeover the structure has seemed "quite safe, in need of no more than occasional repairs and maintenance" (p. 97). Purchase by the Trust has, however, not proved to be end of its troubles. In August 2007, the Antiochian Orthodox congregation that worshipped at St Osmund's (St Dunstan Orthodox Christian Church) moved to St Edmund Campion Roman Catholic Church in Bournemouth, apparently following a dispute over the Romanian Orthodox Metropolitan chosen to consecrate the church to Saint Stephen the Great. Since 2009, the Saint Stephen the Great Charitable Trust has been under the control of a manager appointed by the Charity Commission and its assets (including St Osumund's) vested in the Official Custodian for Charities. The underlying context is complicated, but relates to the Trust's controversial takeover of the SPCK bookshop chain in 2006.