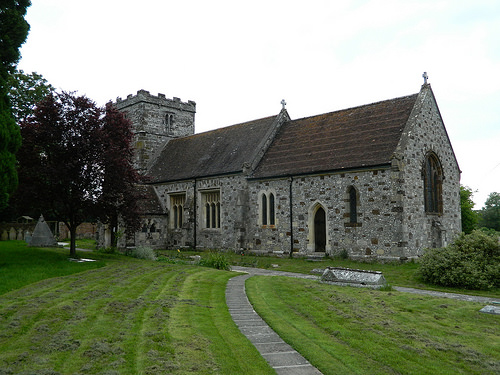 The village of Spetisbury (sometimes spelt Spettisbury) straddles the busy road that links Blandford with Poole (the A350), but was, until 1956, served by a halt on the Somerset and Dorset Joint Railway. Like many other churches in this part of Dorset, the Church of St. John the Baptist has been built with a mixture of building stones including carstone, greensand and limestone, with much knapped flint in the Victorian nave and chancel. It has a fairly squat 15th century tower (with six bells), but the rest of the fabric is mostly 19th century, restored by T. H. Wyatt in 1859. The pulpit is Elizabethan, and there is an early 17th century monument to John Bowyer, who died in 1599. In the churchyard, close to the porch, is a gravestone in the form of a three-sided pyramid; a trihedron.

There was no guide book available when I visited (March 2006).