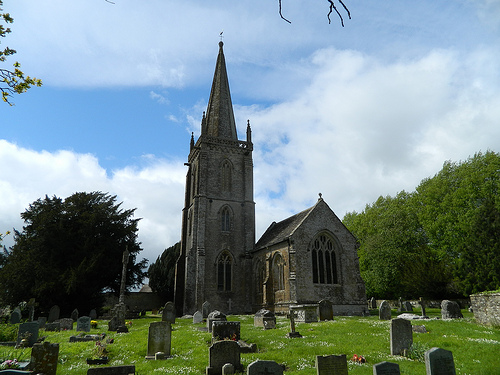 Located to the north of Yeovil in a salient of Dorset bordered on three sides by Somerset, Trent is an attractive old village with a number of interesting buildings. The county boundary around here has changed several times but the parish was finally transferred from Somerset to Dorset in the nineteenth century. Famously, The manor house was one of the places that Charles II hid (twice) on his journey to safety on the continent after defeat at Worcester in 1651. It is recorded that while staying here the King once heard the church bells ringing and on asking a maid to find out why, was told that it was because a trooper from Cromwell's army had claimed to have killed him, "upon which, most of the village being fanatics, they were ringing the bells, and making a bonfire for joy of it" [1]. The guidebook reports that the owners of the manor had the last laugh when they refused the ringers permission to ring in celebration of the restoration of Charles but invited a team from nearby Compton to do so instead.

I used to see this church every day from the train on my way to work in Bath, but it has taken me several years to arrange a visit. The reference books suggested great things and I am pleased to report that it was worth the wait. The church, dedicated to St. Andrew, is one of three Dorset churches with a medieval spire - the others being Iwerne Minster and Winterbourne Steepleton. It is a pleasant enough building from the outside, with a historic cross in the churchyard (now a peace memorial) and the adjacent chantry house (15th century) and Church Farm providing useful context. The church fabric is almost all mediaeval, mainly thirteenth and early fourteenth century with a fifteenth century chancel, built of rubble with dressings of Ham Hill stone. However, it is the church interior that perhaps gives the closest insight to the middle ages. One of the first things that you notice is the late fifteenth century wooden rood screen, said to be the product of workshops in Glastonbury. Equally prominent are the sixteenth century bench ends, which are a fascinating mixture of styles, mixing floral designs, figures and the text of the Ave Maria combined over a number of bench ends. I particularly liked the bench end with a figure of a stag (8N) and the one with four birds (10N), although they are all worth a look. A modern (Victorian) font can be found in the south chapel with, remarkably, a fifteenth century cover, probably the oldest in Dorset. There are a number of monuments, one with an effigy of Sir Roger Wyke as a sleeping knight, another ingeniously fitted into the arch separating the nave from the north chapel and dedicated to one of the Gerard family. A simpler floorstone suffices for Field-Marshal Lord Rawlinson, one of the senior commanders of the British Army in the First World War. A former Archbishop of Canterbury (and headmaster of Repton), Lord Fisher, retired here in 1962 and one of his copes (and a wall tablet) is displayed in the South Chapel. Other items have a continental provenance, and were collected by the Rev. William Turner, incumbent from 1835 to 1875 (whose effigy can be found in the north chapel). These include the seventeenth century pulpit - which is probably Flemish - and the mixed sixteenth and seventeenth century glass in the east window, which the guidebook says came from various places on the continent, including St. Gallen, Wettingen, Lucerne and Cologne. 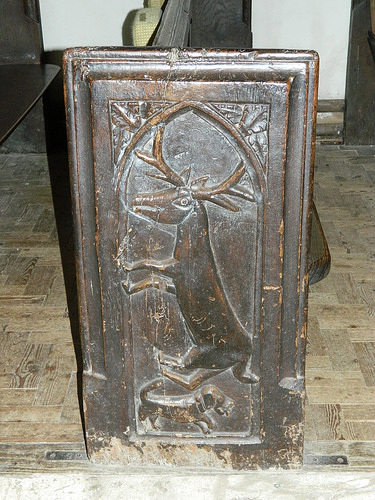 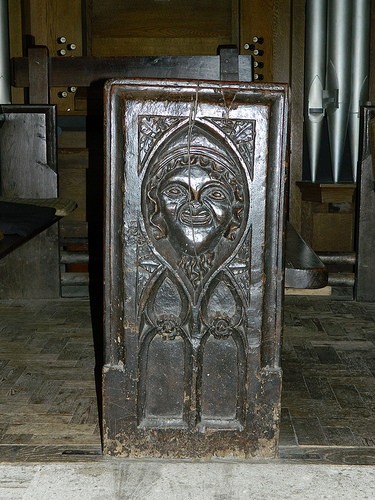 More images of the bench ends can be found here 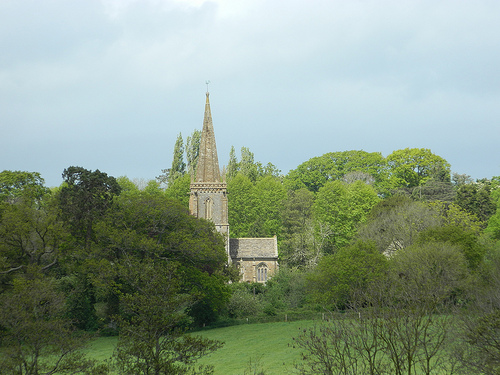 St. Andrew's Church, Trent, Dorset, from the Over Compton road