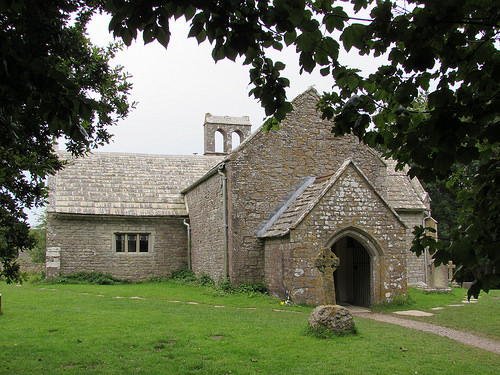 St. Mary's Church, Tyneham is a small cruciform-plan building with walls of limestone rubble. The North Transept and parts of the Nave are medieval, dating from the 13th century, while the South Transept was rebuilt in the mid-19th century by the Rev. William Bond and contains several monuments to the Bond family.

Tyneham, however is no ordinary village. It was evacuated in 1943 to make room for the expansion of the gunnery ranges attached to the Royal Armoured Corps Gunnery School based at Lulworth Camp. The village is still uninhabited - although regularly open to the public - and for some people has become a potent symbol of a vanished rural England , as described in Patrick Wright's recent book The village that died for England [1].

After the military take-over in 1943, the church building initially suffered from neglect (or worse) and some fittings were removed for safe-keeping elsewhere. The organ and bells were moved to Steeple church and the Jacobean pulpit to Lulworth Camp. The church is now maintained by the military authorities and has become the site of a permanent exhibition giving information on the history of the Tyneham valley and local geology and wildlife habitats. The church and exhibition is usually open from 10.00 AM to 4.00 PM on range walk open days.

There is no specific church guidebook currently available. Instead, there are a number of Tyneham valley-based postcards and other publications available:

There were two bells that hung in a bellcote. The bellcote survives, but the bells are now elsewhere.

For a short history of Tyneham and the tank gunnery ranges since 1943, see: http://www.dorset-churches.org.uk/tyneham/

There are some more Tyneham illustrations (and a map) on the following page:
http://www.dorsetshire.com/old/tyneham1.html.