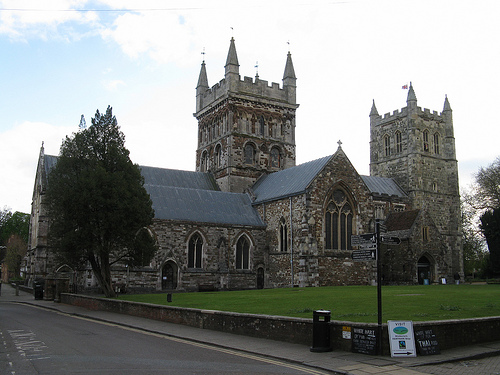 The Minster Church of St. Cuthberga, Wimborne Minster - from the north east (2012).

The RCHME [1] say that, "as a monument of architectural and historical importance the minster church is surpassed, in Dorset, only by Sherborne."

The Anglo-Saxon Chronicle records that Cuthberga, sister of King Ina (Ine) of Wessex (688-726), founded a nunnery at Wimborne in or around the year 705. In around 1013, the nunnery was destroyed the Danes during one of their incursions into Wessex. In 1043, King Edward the Confessor created a college of secular canons. [2, 3].

Nothing of the collegiate buildings survive, but the medieval church itself remains, with nineteenth century restorations by Charles Barry (1840s), T.H. Wyatt (1850s) and J.L. Pearson (1891). Newman and Pevsner [4], however, do not think that the Minster can be called beautiful:

Many other visitors to this church will disagree with this assessment. They may indeed consider that the minster church is not the equal of great buildings like the churches at Sherborne or Milton Abbey, but it fits its immediate context very well, and it looks good when viewed from outside of the town - e.g. from the bypass. Much of the fabric of the church is made up of heath stone and limestone - giving it its 'spotty' character - but the western tower is built of Greensand ashlar, probably brought from the area around Shaftesbury.

Remains of the Saxon church survive in the transepts and crossing. The church was extensively rebuilt and enlarged in the twelfth century For example, the upper parts of the crossing tower date from the twelfth century but is crowned by what the RCHME [5] call "an embattled parapet and angle pinnacles, erected in 1608." The church was enlarged and partly rebuilt several times in the thirteenth and fourteenth centuries. In the fifteenth century, a spire was added to the crossing tower but this fell in 1600. The author of Coker's Survey of Dorsetshire (1732, but probably written a century before) recorded the spire's collapse in the following way [6]:

Having thus discoursed thus longe of this Church, I will not overpasse a strange Accident, which in our Dayes happened unto it, viz. Anno Domini 1600, (the Choire beeing then full of People at tenne of Clock Service, allsoe the Streetes by reason of the Markett) a sudden Mist ariseing, all the Spire Steeple, beeing of a verie great Height, was strangely cast downe; the Stones battered all the Lead, and brake much of the Timber of the Roofe of the Church, yet without anie Hurte to the People ...

Also In the fifteenth century a western tower was added to the minster church, presumably because the crossing tower was not strong enough to cope with the ringing of bells. This tower was also a source of trouble. The Reverend Thomas Perkins [7] reports.

... as early as 1548 it was thought necessary to brick up the west doorway, and notices of unsoundness of the tower occur frequently in the church books. In 1664 we find the following entry made: - "Paid in beere to the Ringers for a peale to trye if the Tower shooke £0 1s. 0d." As we read this entry, we cannot help wondering if the large amount of beer which a shilling would purchase in those days was given to the ringers so as to give them a fictitious courage and blind their eyes to the possible danger of bringing the tower down upon their heads.

The interior of the church is also very interesting. Amongst other things, it contains a Saxon (but the RCHME suggest 13th century) oak chest, a Norman font made of Purbeck Marble, a medieval astronomical clock, various memorials including effigies of John de Beaufort and his wife, and - perhaps most famous of all - a chained library. In the chancel there is a 14th or 15th century brass commemorating the Saxon King Ethelred, the elder brother of King Alfred the Great who was killed at the battle of Merton, and buried in the Minster here.

Wimborne Minster has its own extremely good Web site: http://www.wimborneminster.org.uk/

Wimborne Minster. Derby: English Life Publications, 1998. ISBN 0-85101-288-4.
Sixteen page guide to the minster church, including a tour of the interior, a note on the bells, and a brief history. Other books and leaflets describing the chained library, the bells, etc. are also available from inside the church. 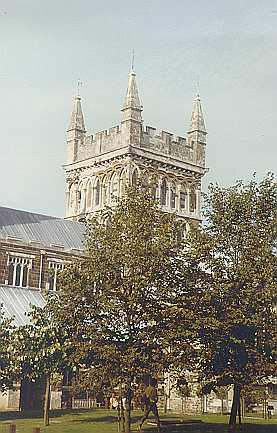 The western tower of the Minster now contains a peal of twelve bells. Dove's guide [8] informs us that the bells are:

The current ring mainly dates from 1910 when an advisory committee decided on a major 'restoration' of the bells. The Minster guidebook says that an offer to meet the cost of two new bells by H.O. Chislett meant that "it was agreed to accept the tender submitted by Messrs Gillett and Johnston of Croydon and scrap all the old bells and, apart from retaining the old tenor inscription, to cast a new ring of ten bells to be hung in a new metal bell frame." The ring was augmented to twelve in 2012, with the addition of two bells cast at the Whitechapel Foundry.

As the guide book suggests, the ring of ten was "a fine peal of bells", especially for those who ring and listen to church bells. They have also apparently only required minor maintenance and renewal of parts since their dedication in June 1911. In retrospect, however, it is unfortunate that the ring's creation meant the loss of some very historic bells. The bell historian H.B. Walters [9] remarked in 1938 that the "loss of Samuel Knight's two interesting bells and that by Antony Bond, is much to be regretted, and the reproduction of the inscriptions on the new bells is a poor compensation."

Fortunately, Canon Raven had preserved full details of the old ring in his Church Bells of Dorset [10]. John Wallis cast the oldest two surviving bells at the Salisbury foundry in 1598 and 1600. An itinerant founder, Anthony Bond, re-cast the Tenor in 1629. Two further bells by Samuel Knight of Reading were added in 1686, one (the then third) implying that until that date there had been only five bells. The remaining bell of this old six was cast (re-cast?) by Robert and James Wells of Aldbourne (Wiltshire) in 1789. Two new trebles (by C. & G. Mears of London) were added in 1856 to make a full octave.

Raven's description of the old ring of eight is added below. Please note that none of these bells survive, although the inscription on the old tenor bell was added to Gillett and Johnston's new tenor in 1911.

Canon Raven elaborates in detail on Anthony Bond's tenor bell, which records a much earlier casting [11]:

On the strength of the inscription on the tenor at Wimborne Minster one fine bell at any rate may be assigned to Dorset in the Plantagenet period. When Anthony Bond in 1629 recast this grand tenor, placing on it his monogram, the inscription, which still remains, was "MR WILHEMVS LORINGE ME PRIMO FECIT IN HONOREM STÆ CVTBERGÆ RENOVABAR SVMPTV PAROCHIALI PER AB ANNO DOMINI 1629," and after the names of the Churchwardens, and initials, probably those of the three priests of the Minster, is a shield bearing a chevron and three mullets. It is remarkable that this bell appears to have been cast with a flat crown. Mr. William Loringe was one of the Canons of Wimborne Minster in the early part of the reign of Richard II. The care of the parish authorities in the reign of Charles I. preserved the name of the foundress of the Nunnery, the sister of Ina King of Wessex, married to and divorced from Osred King of Northumbria, Saint Cuthberga.

Raven can provide very little information about Bond himself [12]:

... Anthony Bond, a founder about whom information is earnestly desired. Four bells of his remain in Dorset, all closely connected in locality and time - Wimborne Minster tenor, 1629; Steeple second and third, 1633 and 1634; and Coombe Keynes second, 1636. Mr. R.C. Hope, probably following Lukis, speaks of him as found in Norfolk and Suffolk; but East Anglia knows him not ... Some day it may come to pass that Wimborne Minster records who may reveal the man, who could have had no mean reputation to have been entrusted with the recasting of their tenor, the Cuthberga bell, made by Mr. Wilhemus Loringe, one of the canons of the church, in the eighth year of King Richard II. Hutchins notes its "repair" with the Morrow Mass bell and a bell in the spire in 1534.

Raven should know about the lack of any Norfolk or Suffolk connection, as he had also collected details of bells in East Anglia. Walters [13] adds Almer's treble, 1633 to Raven's list of Bond's bells and concludes that he "is apparently an itinerant founder, his date being 1629-1636."

After Raven had published the above comments, Mr. G.F. Score, parish clerk of Wimborne Minster provided some more details about the bells, based on parish records. The full details which include extracts from the records themselves - are available elsewhere [14], but some details may be of interest. In 1608, for example, John Wallis the Sarum bell founder charged the Minster 4s. 6d. for "tacking doune of the fourth bell and hanging of him upp againe."

Score points out that the re-casting of the Great Bell in 1629 was "evidently a great event for the people of Wimborne, and the churchwardens were very careful to give every detail in their accounts." This includes the following sum:

Raven [15] also records a tradition that several of the bells from the old ring of eight came from Kingston Lacy.

The initials T.B. on the 3rd and 4th bells [both by Samuel Knight of Reading] are those of Sir Thomas Bankes, the remaining letters on the 3rd being the initials of Matthew Raindle and Thomas Portell commemorated on the 4th.

Other images of Wimborne Minster: 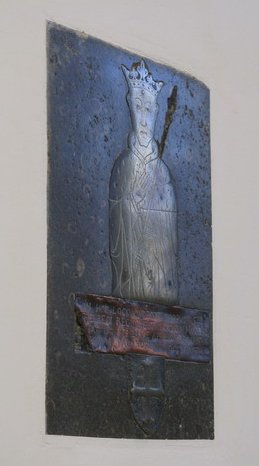 14th or 15th century brass memorial to King Ethelred in the chancel of Wimborne Minster, Dorset. 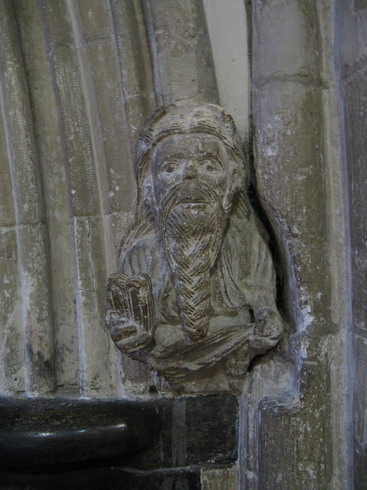 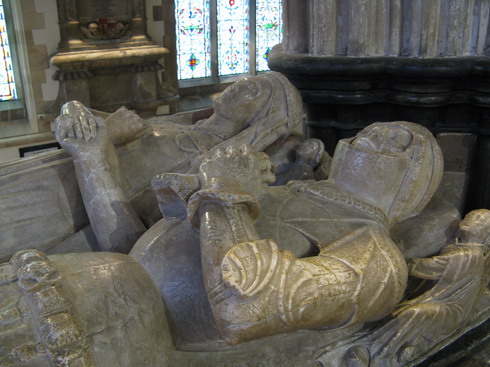 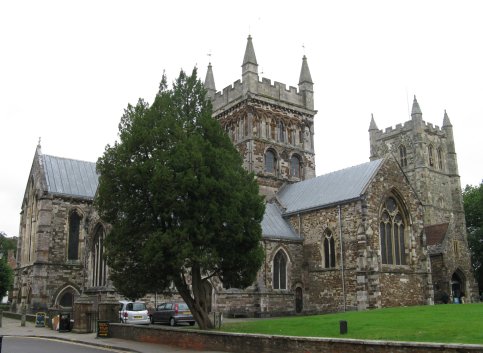 The Minster Church of St. Cuthberga, Wimborne Minster - from the north east (2008).