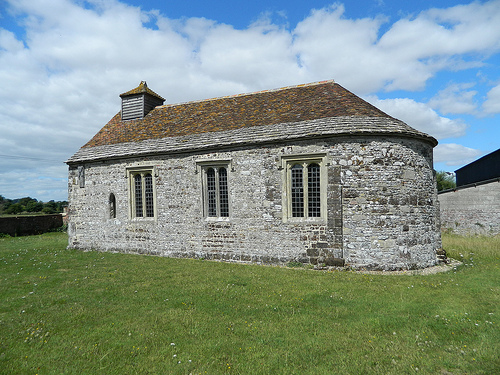 Winterborne Tomson is a very small settlement in the Winterborne valley, sandwiched between the parishes of Anderson and Winterborne Zelston. The church is a single-cell Norman church with an apsidal east end. Much of the woodwork inside dates from the early 18th century, when the church was refitted at the expense of William Wake (Archbishop of Canterbury, 1716-1737), who came from nearby Shapwick. The church was disused from 1896, and was rescued in the 1920s from semi-dereliction by the Society for the Protection of Ancient Buildings (SPAB); the restoration supervised by the architect A. R. Powys and funded by the sale of some of Thomas Hardy's manuscripts. The church is now cared for by the Churches Conservation Trust.

Of my father's other parish, Winterbourne Tomson, there is little to say. It consisted of a handful of people - never much more and often less than twenty in all - living in a few cottages clustered round a decayed little church in a field two miles from Bloxworth. My father took a service there every Sunday for his tiny congregation until about 1890, when the church was closed with the consent of the Bishop, and with good reason, since there was a church just beyond each of the next fields to east and west, and the waste of energy was absurd. For about thirty years, as Curate or Rector, my father had walked over Sunday after Sunday in all weathers, sometimes returning drenched to the skin, sometimes with his beard bristling with long icicles, sometimes almost 'done up' with the mid-day heat. He calculated that he had covered about 7,000 miles in coming and going between Bloxworth and Tomson. In later years the occasional duties at Tomson were generally performed by Mr. Askew, the Rector of the two adjoining parishes, who was kind enough to give his help. One who knew my father well some thirty years ago writes: 'My mind is crowded with memories of the very happy days which your father and mother planned for us in childhood. They were friends I can never forget. There are certain bits of landscape I can only picture with your father in them. Tomson Park requires him with his big stride and his coat-tails fluttering in the wind. I think of him as the ideal parson of a small country parish.'